Many taxpayers make quarterly estimated tax payments during the year to stay current on their taxes, but many who should overlook this step. The Internal Revenue Service today urged those who paid too little tax in 2022 to make a fourth quarter payment on or before January 17 to avoid an unexpected potential tax bill or penalty when they file in 2023.

Taxes are normally paid throughout the year by withholding tax from paychecks or by making quarterly estimated tax payments to the IRS or by a combination of both. Individuals do this because income taxes are pay-as-you-go, meaning taxpayers need to pay most of their tax during the year as income is earned or received.

Who needs to make a payment?

Taxpayers who earn or receive income that is not subject to tax withholding such as self-employed people or independent contractors should pay their taxes quarterly to the IRS.

In addition, people who owed tax when they filed their current year tax return often find themselves in the same situation again when they file the next year. Taxpayers in this situation normally include:

The IRS reminds people that most income is taxable. This includes unemployment income, refund interest and income from the gig economy and digital assets. When estimating quarterly tax payments, taxpayers should include all forms of earned income, including from part-time work, side jobs or the sale of goods.

5 Reasons to Hire Accounting Services for Your Company 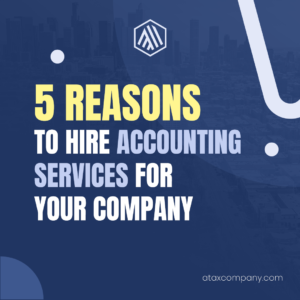